Tero Isokauppila is the founder of Four Sigmatic, a wellness company helping people to nourish their bodies inside and out.

Tero’s roots (or mycelium, if you will) are in Finland, where he grew up foraging for mushrooms and other wild foods on his family’s farm. He later earned a degree in Chemistry, Business, and a Certificate in Plant-Based Nutrition at Cornell University. In 2012, Tero founded Four Sigmatic with the dream of bringing a little Everyday Magic™ to the lives of all.

An expert in all things related to mushrooms, superfoods, and health, Tero is the author of two best-selling books: Healing Mushrooms, an educational cookbook from Avery Publishing, and Santa Sold Shrooms, a children's book for adults about the magical origins of Santa Claus.

Tero was chosen twice as one of the world’s Top 50 Food Activists by the Academy of Culinary Nutrition, and has appeared in Time, Forbes, BuzzFeed, Vogue, Playboy, GQ, Harper’s Bazaar, and Bon Appétit. He is also a sought-after speaker, featured at Summit Series, Wanderlust, WME-IMG, Google, and the Fast Company Innovation Festival.

IMAGE GALLERY AND OTHER RESOURCES 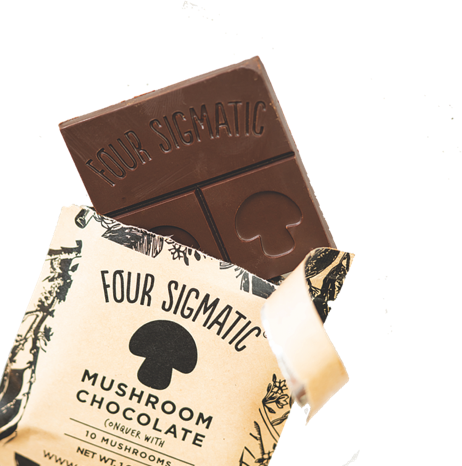 Stock Up On Limited Edition Mushroom Chocolate Before It Sells Out!